C. Vision Productions produces professional quality railroad videos that delight train enthusiasts of all ages. Combining the talent and experience of 30 years in the video production industry with the latest video technology, our programs give you the sensation of “Being there!” C. Vision’s railroading videos capture railroad action the way you want to see it… Professionally! 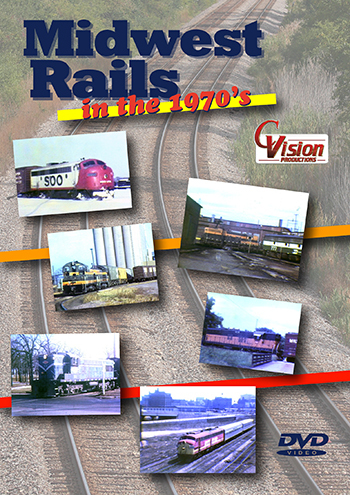 Locations in Illinois include Chicago, West Chicago, Glen Ellyn and Lemont.In Wisconsin, we visit Green Bay, Stevens Point and Altoona.Along with Duluth and Superior, we see many locations in the Minneapolis and St. Paul area of Minnesota.Last, we catch some trains through several small towns in Minnesota.

The highlight of this video is extremely rare coverage of the Milwaukee Roads line between Jackson and Hatfield, Minnesota!

Experience railroading the way it was in the 1970’s.“F” units, Alco’s and Fairbanks Morse power mix in with other EMD and GE locomotives.Midwest Rails in the 1970’s will bring back the memories of all this great railroad nostalgia.

Save this product for later
Display prices in: USD

"I just received and watched your video on the "Corn Belt Lines." Awesome does not do it justice"

Join our list to hear about latest releases and offers.